It is the mission of Oasis High School to provide its students with an opportunity either to complete UC/CSU approved “a-g” courses, to accelerate credit accumulation, or to make up deficient credits, in a safe, secure, and supportive learning environment, with a well prepared and dedicated staff, and with the requisite academic resources to achieve and succeed at an individual pace and in a unique way. 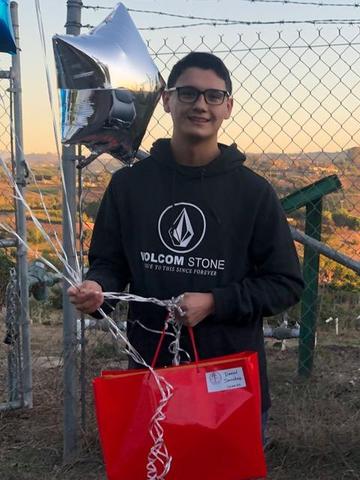 Daniel Sanchez, nominated by Oasis teacher Tracy Markham, started as an English language learner at Oasis when he was a freshman. With the struggles of learning the English language and culture as well as living in a grove, with limited resources, including access to technology, Sanchez has continued to work diligently to successfully graduate in four years. Markham said that “he has never given up when the work was arduous and a big stretch for his language skills; he is one of the nicest students I have ever worked with.” Having started high school as a shy student, he has gained confidence from his instructor and academic growth so that he plans and implements projects on his own, always with a positive attitude – no matter how challenging the goal is. Markham continued, “Daniel exemplifies perseverance, respectfulness, and graciousness” and, because of his personal character, he well deserves this prestigious honor.  Submitted by Constance Fellios.
Village News Link to read article in the newspaper